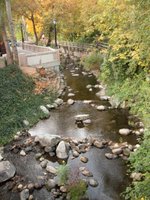 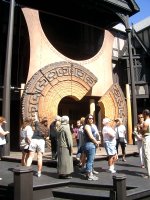 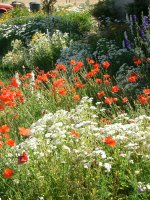 These are a few of my favorite things in the Ashland area, in the mountains of southern Oregon, just 14 miles north of the border with California. The town is a small university town whose main industry is serving visitors to the Oregon Shakespeare Festival, which has been going on since 1935. Apparently it has only begun to assume major regional status in the last 15 or 20 years or so. Many Californians, especially from the Bay area come up here for retirement, escaping the crowded highways and taxes of California. And by selling their chicken-coop houses in the Bay area for 1-2 million and buying much nicer places in Oregon for perhaps a tenth of that amount and living on the rest.

There are lots of flowers in the springtime, and they allow tours backstage almost every day. This is really fun as they usually have one of the resident players show you around.

We started coming here some time in the middle to late 90s. Our first time was on an Elderhostel which we went on to see if we liked it because we had in mind to go to New Zealand and Australia with the same outfit. It was a marvelous week with lectures in the morning and early afternoon and plays in the evening. They usually managed to get one of the players from the show the night before to come and talk to us the next morning. They and we were fairly passionate about the theatre so it made for some good interchanges between players and audience. The latter, of course, is an essential part of the theatre. For some reason the food was extremely good for a college campus. The only drawback was that we stayed in college dorms so we had fairly Spartan single beds and shared bathrooms. It did, however, satisfy an ancient fantasy that we probably all had in the 50s of getting our girl friends or boy friends into our dorm room and running around the room naked. 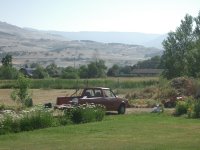 Ashland is about 15 miles east of Medford, both on the I5. The latter is an agricultural center for the region. More and more grapes are being grown in this area. 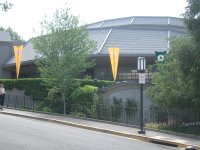 There are a surprising number of good restaurants in this town of 20,000 or so. 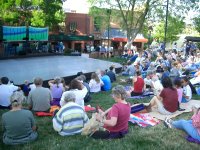 They usually have an outdoor show in the summer before the main show(s).
Posted by Ken & Carol at 19:08 No comments: