Long Weekend in early May 07 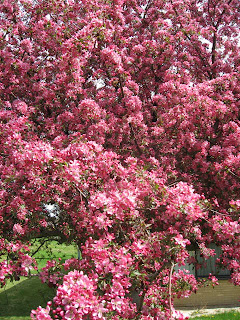 To the right is our backyard crab apple tree in full bloom for perhaps a week or so per year. It''s only other trick is to produce tiny little apples that make the birds tipsy so they fly into our windows.

One time we found 4 dead birds in a row in front of our garage entrance. We feared some hooligan mischief until we observed the marks of 4 live birds on the windows of our bedroom just above the garage door.

They must have been in formation as they crashed headfirst into the window.

Friday evening: Saw The Caine Mutiny Court-Martial at Billings Studio Theatre. This was well done by almost everyone on stage. It did require some suspension of disbelief in contemporary ways of viewing our military. And it did focus our attention on some of the problems of all-out war with civilians (or those who should have remained civilians) acting as warriors. 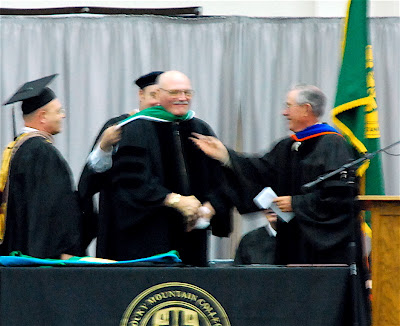 Saturday afternoon: Invited to attend Rocky Mountain College 125th Graduation by our friends and neighbors, Jim and Sandy Almond. In addition to about 200 graduates, including about 20 or so physician assistants, there were faculty and friends and of course, the relatives of the graduates.

That's Jim getting his colored scarf to the left, and serving as the President of the Board below. He is a hard worker in whatever he does. 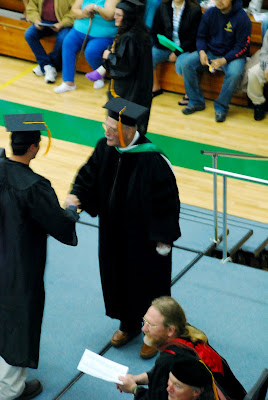 You know you are aging, YKYAA, when you begin to attend graduations featuring your friends' receiving honorary degrees. The scarves were very colorful. Some useful advice was given by the speakers but I don't think the intended hearers were listening.

Sunday: Church in the morning as usual. We saw and heard Bellissimo, a very good bell-ringing group at St Pius (below) in the afternoon. I'm nor sure why they moved from the United Methodist next to the Alberta Bair. They did a little entertaining along with some pretty good ringing. The sounds were good in this place, as they bounced around a good deal. 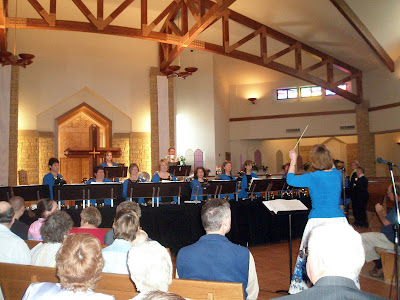 Monday: Memorial service for neighbor who died very slowly from Alzheimer's dementia. Ten years is a long time for that sort of problem. YKYAA . . . (see above). 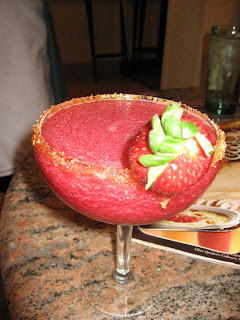 This was a long weekend in May. I almost forgot about Saturday evening at the Olive Garden with our friend Lynda. That is her very tasty strawberry dacquiri above.
Posted by Ken & Carol at 17:19 No comments: