Going for a Drive in BigHorn Canyon 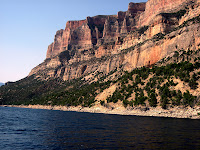 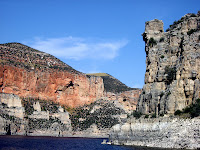 Friends Bernard and M'lis invited us to a cookout in BigHorn Canyon. They have a pontoon boat which goes plenty fast for us. The four of us headed for Hardin and Yellowtail Dam on Monday after the heavy weekend traffic. 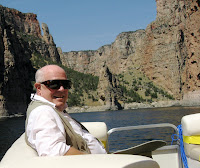 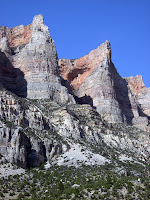 We arrived at the marina about 11am, and spent probably 4-5 hours lazing around the Canyon.

We had an excellent picnic lunch complete with hamburgers with all the fixings, did a little fishing, the last not very successful as we forgot the hooks, and just enjoyed each other and God's handiwork in putting together this not so solid earth. Maggie the Dog accompanied us without a problem. 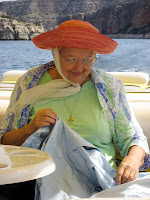 These are difficult to move around to where I want them. I am going to let them stay where they are. Bernard driving the boat to the left and M'lis to the right. A good time was had by all.

Pictures from before and after a life 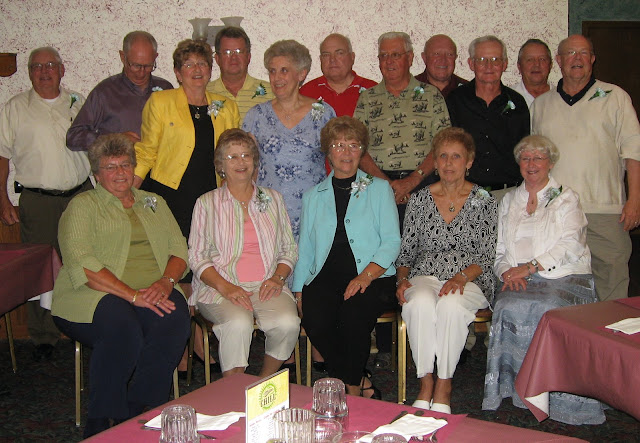 Today the Hustisford Hilltoppers, class of 1957, celebrated the 50th anniversary of their graduation from Hustisford High School at the Iron Ridge Inn, with a very nice gathering and meal. By the way, the Hilltoppers are no longer the Hilltoppers, but rather the Falcons. Even the school is absent these days. Yes, that is true, because I remember driving up the hill toward the school and not seeing it. Shocking! 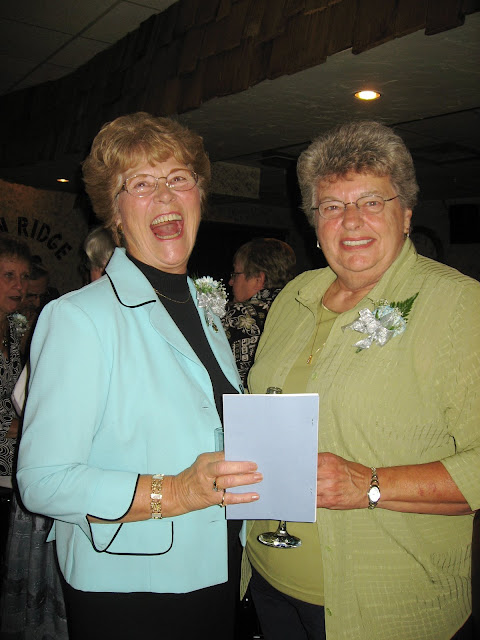 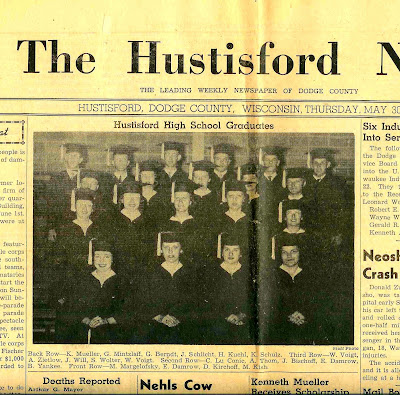 The way I remember it there were 20 of us parading across the stage then, and 19 actually graduated (see the newspaper clipping left, saved of course, by my mother) but nowadays they count all those who started in 1953 and would have graduated 4 years later but for unforeseen cirumstances, which they say raises the number to 26, of which 16 showed up to celebrate.

That is Shirley Wolters and Janice Will above right. They have some other names nowadays but it is easier to use their maiden names. Do we still use the term "maiden?"

There were two premature deaths that we all knew of, and I suppose they are celebrating as well; several could not be located, and of course, a few contrarians whom no one has seen for a long time were not really expected to show up. 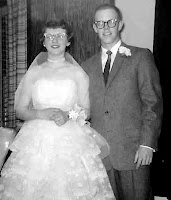 Though recent events, like breakfast, may escape us, we all seemed to have some memories that were tucked away for a long time. Odd how those thoughts get stored only to be recalled when some visual or other stimulus comes along.


We were all pleasantly surprised at the good memory of Harry Kuehl, who writes a little poetry these days and managed to remember a few things about each of us that we thought had been forgotten. He remembered that Carol cried at our graduation and that I played the trombone. 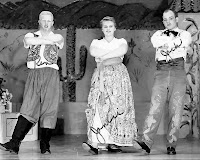 I couldn't resist, please forgive me, putting in these old pictures scattered about (again courtesy of my mother's saving habit). Just like on TV the older pictures are black and white and the more recent are colored. Or don't we use that word anymore?

Yes, we did shoot free throws underhand in the olden days. And Carol and I went to a high school prom a long time ago, and I still remember kissing her for the first time. She even remembers where!

For those whose memories need jogging, in the picture to the right, that is me on the left, Janice Will now Mintzlaff in the middle, and Jack Schlicht on the right. I don't remember the name of the operetta but it was certainly directed by one of our favorite teachers, Harold Johnson. 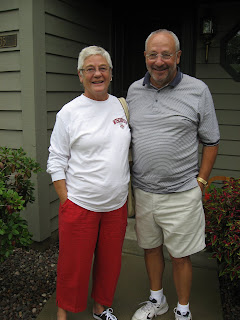 Had another reunion with some friends from Carroll College. Tony and Ann Serpe living in Elkhorn, he administrating, and eventually Superintending for many years; and she teaching chemistry, and lately dealing with non-traditional students listening to a different drummer. Nice people and salt of the earth. They haven't changed at all except maybe for the better. They remind me of some of the teachers I knew as a child. Tony was a year behind me at Carroll and in the same fraternity (which doesn't exist anymore) and Ann was a freshman when I was a senior. She reminded me of some of the idiosyncratic sayings of our favorite chemistry professor, AA Sunier, like "N--- in the woodpile," with not the slightest bit of malice. By the way, these are the parents of the writer of the blog Olive Knitting, Lynn Serpe, now hiding out somewhere in rural Italy.

[The reason I know the fraternity doesn't exist anymore is that Tony told me so when we visited and when Gerald and I went to Jack's funeral we slipped into Waukesha and drove around Carroll College. The original 200 McCall had been razed and now a nice new private house or two has been built on the corner.]

[Added later 3 September 2007: ". . . send not to know for whom the bell tolls, . . .": I note with sadness that the guy on the right in the operetta picture above, and in the red shirt in the picture to the right, Jack Schlicht, cashed in his chips early (30 August) a few days after our 50th celebraton. He was a friend in grade school, high school and college and taught us all about the virtue of competition whatever game you are playing. His brother taught us about courage when life gives you bad cards. His father, our school principal and superintendent, taught us about being a man and the little we know about algebra and geometry; and his mother, the original Peg whom our oldest daughter is named after her, taught us all about the way men and women should be. Requiescat in pace—all of you.] I wish I knew where these pictures go when they disappear!
Posted by Ken & Carol at 13:41 No comments: