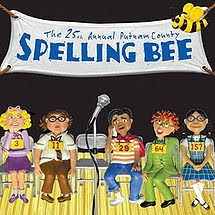 Last Saturday night we saw "The 25th Annual Putnam County Spelling Bee" sponsored by Rocky Mountain College, at Billings Studio Theatre, directed by one of our Wizards in Residence, Professor Gerry Roe. It was good, often funny, nearly always entertaining. For one thing, Roe did not try to make 20 year old students look like 50 something characters.

Music was occasionally odd as the instrumentalists sometimes appeared to be playing in a key different than the singers and sometimes against each other. Not unpleasant really. But it was a surprise to hear an excellent on-key voice on Sunday evening from the guy who was an ex-con supposedly doing his community service on Saturday with sometimes strange high-pitched sounds.

A little unusual was the selection of four not-quite-random people from the audience to join the 6 adolescents. Apparently this is the way the show has been done in the past. See the Wikipedia entry here.

They did a little improv which usually worked OK. A major clanger was using Denny Rehberg's boating accident as the obligatory swipe at local politicians when Senator Baucus and his paramour would have been much more appropriate. Perhaps there is an unwritten rule about these things. 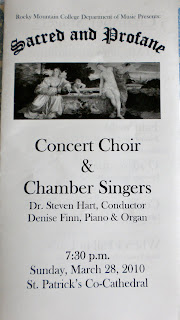 On Sunday evening we heard the larger Concert Choir and the smaller Chamber Singers, again from Rocky Mountain College, in a concert at St Patrick's Co-Cathedral. This was magnificent, something we almost always expect from another of our Wizards in Residence, Professor Steven Hart. There were some good solo voices at the top and bottom though occasionally some of the sopranos had difficulty blending in when that was necessary.

I like Professor Hart's little talks about each piece. These were a nice mixture of Sacred and Profane as the program suggested. The sounds at St Patrick's are very nice. The audience, fairly large, just a few less than the earlier Palm Sunday masses, were very appreciative. So much so they gave a standing ovation for both the penultimate piece, Benjamin Britten's Rejoice in the Lamb, and again at the end of the program. 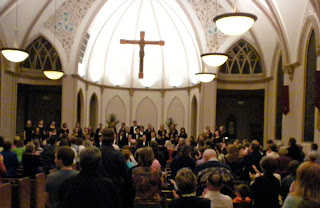 These folks usually do something before Christmas and then concerts like this one around Easter, though they may have to call them Holiday and Spring concerts in order to maintain good PC standing and get some ink in the local paper.

Keep an eye on the Gazette for their performances next year.
Posted by Ken & Carol at 20:52 No comments:

Before He Was House

I am usually able to resist looking at UTube short videos and even more able to resist forwarding them to friends, but just this once I couldn't resist displaying my liking of British humor. Check this out. I got it from Are We Lumberjacks?

http://www.youtube.com/watch?v=hNoS2BU6bbQ&feature=player_embedded
Posted by Ken & Carol at 15:11 No comments:

The Boys of Late Winter are Back in Billings

If alliteration offends your poetic rules then I am sorry. To me it seems to come naturally, like thirds and sixths on the piano or in the choir, some choirs anyway. 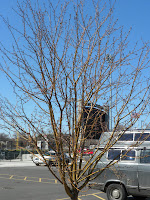 Apparently there is no "mercy rule" in this conference or at least for these games, so some of the games' scores resembled football scoring. I checked out the first game on Saturday and left at the top of the 5th inning, when Central Washington University of Ellensburg WA led with 4 touchdowns and extra points to two safeties by the home team, i.e. 28-4.

I wrongly assumed they would mercifully call it after 5 innings or at least after 7 innings but that was not to be. Eventually, they got through nine innings and the final score was 31-15 or so according to this morning's Gazette. 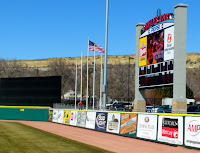 Naturally, a fair number of pitchers were used by both teams so the 7 inning night-cap ended up 13-12 in favor of MSUB.

Baseball has some different rhythms and psychology than other games. CWU scored 14 runs in the 2nd inning and then had several other smaller outbursts of 7 and 5 in between some almost scoreless innings. This did not discourage our boys. They batted around in the bottom of the ninth and could conceivably be still batting. None of that forty minute racing up and down the floor flinging it in the hoop while doing some not so subtle mayhem to the opponents.

The two teams split a doubleheader on Friday afternoon as well. 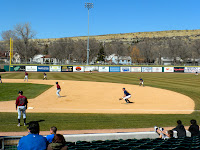 Students get in free, and Seniors get in for $3. For not very clear reasons there are no season tickets available at the park. The concession stands were not open though a few caps and jerseys and potato chips were available.

The infield grass looked nice, but the outfield looked like it needed some water. The dirt part of the infield needed a little attention as well. It will be a long season as the Legion teams will be moving in soon and then, of course, the Mustangs will arrive in June. Weekends for now and then every day when the kids get out of school.
Posted by Ken & Carol at 20:31 No comments:

The Greeks thought that Nemesis inevitably followed Hubris. I wonder if there is any suggestion of a timetable for this?

This benign looking statue comes from the Romans in Egypt around the 2nd century A.D. and is thought to be a representation of Nemesis.

I wonder if ignorance of Greek mythology will be an acceptable excuse for our— sure to be wrecked even more than it is now—healthcare system.

Wouldn't the honest thing for all of our politicians on the Left to say on last Sunday evening have been "Gee, I wonder if this is going to work. I hope so. Aye."
Posted by Ken & Carol at 10:11 2 comments: 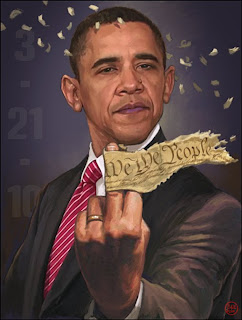 I was walking out of a courthouse in Stillwater County yesterday when I overheard someone talking loudly on a cellphone—is that a case of being "cellurude?" to make use of a sniglet—about a "breach of contract" suit. That phrase—"breach of contract"—sounded wonderfully old-fashioned and reminded me of another phrase that I haven't heard since my early childhood village days in deepest Wisconsin.

Does anyone use the term "alienation of affection" any more.

Is Montana one of those states where one can sue for "alienation of affection?" Maybe we could find a few lawyers to work up a class action case for all of us that have been treated so badly by President Obama? With the correct motivation it seems you can get lawyers to do most anything.
Posted by Ken & Carol at 15:53 No comments:

Oh Canada, You Stand On Guard For All Of Us

Wow, what a grand show, from the beginning sadness to the sudden-death beginnings of our hockey dreams of the future. An amazing number of gold medals. Wow.

Way to go, dear friends from the north. What amazing neighbors we have had for so long. Thanks for sharing all your talents.
Posted by Ken & Carol at 09:43 No comments: