St Jerome, protector of sarcastic bloggers, pray for us! 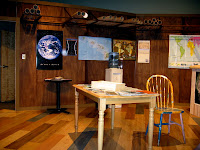 We went to another one of Steven Dietz's plays at our favorite downtown theatre last night. Of course I am speaking of Venture Theatre, the offspring of Mace Archer and Lysa Fox with some help from others.

Last week it was "Last of the Boys" and this week it was "Lonely Planet," (the stage setting is to the right for LP). The latter is a slightly dated two person dialogue with occasional soliloquies more or less directed at the audience by one or the other of the players. There were at least two memorable lines: one was "Lovers are easy, friends are hard;" and the other was about the usefulness and ubiquity of irony in these latter days which I have unfortunately forgotten.

This must have been written at the height of the HIV/AIDS hysteria, maybe in the late 80s, [first staged in the early 90s] though curiously enough, the players used fairly contemporary cellular phones.

Reminded me of La Boheme but not of course sung, and there was a fair amount of whining about the morbidity and mortality that afflict us all, whether we sodomize or not. By the way, are we still allowed to use that word, the "s" word I mean? I don't remember that from La Boheme, though I might have missed something because of my lack of French. In any event, it was entertaining and instructive, reminding us of things about ourselves that maybe we had forgotten. 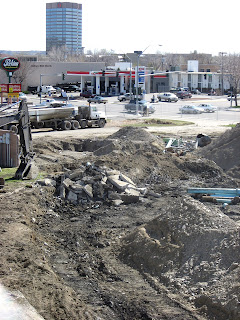 Having seen three or four Dietz plays in the past few months, I feel fairly safe in lauding his rough and tumble way of treating time, its passing, and how memories stick in our minds in a sometimes unpredictable fashion. Whenever I get a whiff of barnyard, if I close my eyes I get flashbacks to my grandfather's dairy farm some 50 or 60 years ago.

Talking about unpredictable memories reminds me of Cobb Field, old and new, and the process in between the two. The above picture was taken from the grandstand looking toward the First Interstate Building over the now absent swimming pool.

That was particularly notable in the "Last of the Boys." Mainly two Vietnam vets with their problems and how they get transmitted to others and even the next generation. Are there any Vietnam vets that are now normal? Maybe we should start a registry, just in case. In fact I know some: how come we never see them on stage?

This was one of the better plays I've seen and heard this season. That includes a few at Ashland OR. Of course, there were a few obligatory swipes at the Left's demons du jour, i.e. Republicans are evil, the USA is bad, etc but given the politicization of everything and everybody these days if those demons were not there the play might not ever be produced. These exclamations are like clearing your throat for our Leftist friends.

Mace Archer directed both plays and acted in one. He is leaving after this season. We are all saddened because he is a wizard, as an actor of course, but especially at directing younger players. He was able to give almost every player that degree of fearlessness that enabled them and their audiences to easily "suspend disbelief." Which reminds me of noticing some purple flowers during our short spring season. See below. 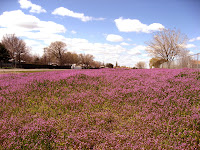 God gets pissed if you don't notice the color purple according to Alice Walker.

One more Dietz play is coming up in May: "Fiction": On the evidence of the earlier seen plays this one should be worth the price of admission. Watch this space. 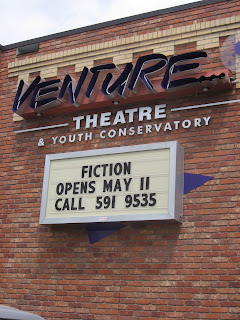 Excellent players with pretty good play. Again, playing around with memory and the elusive idea of truth. I don't think Dietz denies the idea of truth, but only teases us with the difficulty of getting at it.

Matt M will be joining us this summer for a couple of weeks, along with his mother and brother. Matt will be attending a 2 week drama camp at the Venture Theatre.
Posted by Ken & Carol at 14:02