Norway Apologizes To The Jews

Only a little over 70 years too late, and certainly not for the continuing blight of anti-Semitic rage seen in these days. Of course, anti-Semitism is and has been a world-wide disease with severe worsening in 20th century Europe of the 30s and 40s. Check out Pamela Geller's Atlas Shrugs.
Posted by Ken & Carol at 09:34 No comments:

". . . when the sunspots declined or vanished, the earth got colder. "

The quote in the headline comes from this excellent blog by Russ Steele.
Posted by Ken & Carol at 09:24 No comments:

From a Texas Snowbird Friend 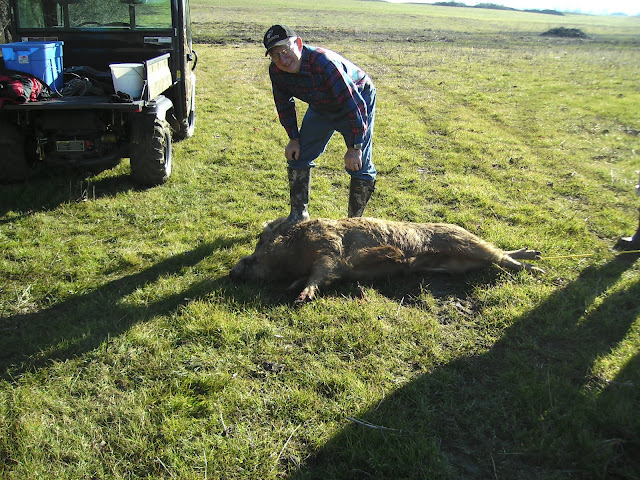 Just recently I heard from a high school friend who winters down in Texas. Not all cheese heads like the Wisconsin winters as you might guess. He sent this remarkable picture of a wild pig. He claims the sows are good eating, though both boars and sows stink up the place quite a bit. They dig up the ground at night according to my friend Gordie, so he sets traps for them. See above and below. He didn't say what they were digging for. 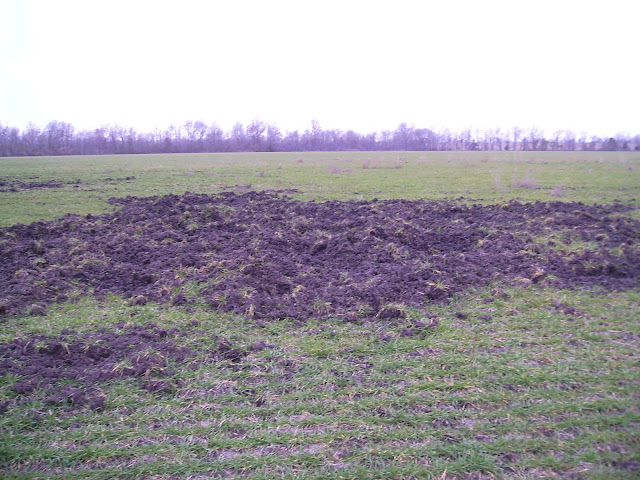 Can We Buy Scientific Malpractice Insurance? 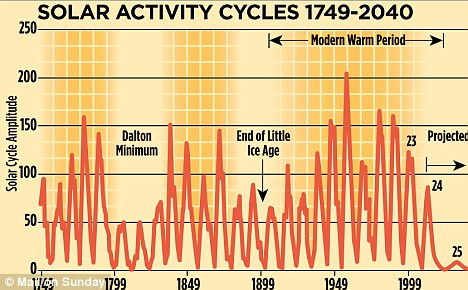 ‘If we don’t see convincing evidence of global warming by 2015, it will start to become clear whether the models are bunk. And, if they are, the implications for some scientists could be very serious.’—the punch line from this interesting article, pointed out to me by the clever people at Climate Depot.
Posted by Ken & Carol at 18:15 No comments:

Wandering Around Sun City West I 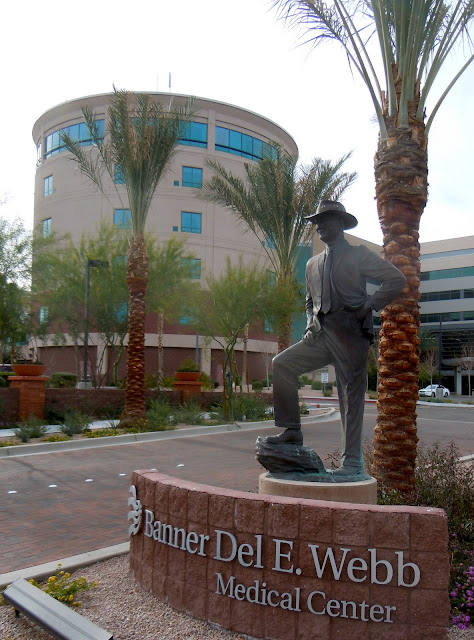 A nice life-size statue of Del Webb stands in front of a big hospital on the corner of Grand and Meeker on the outskirts of Sun City West on far reaches of the northwest Phoenix metropolitan area. I've come across a Del Webb Boulevard, a Performing Arts Center, and I suspect a bunch of other places honoring him.

He was one of those 'robber barons' of the 20th century who made his fortune in construction. Born in 1899 and died on the 4th of July, 1974 in Rochester, presumably at the Mayo Clinic, after an operation for lung cancer.

Came from modest circumstances, father a fruit farmer in California, was a high school dropout;  came to Phoenix area in 1928 to start his company after a serious bout of typhoid fever. Did well during WWII, including building a new town for interned Japanese. Others had the idea of an age-restricted community but he figured out how to do it. Sun City opened in 1960 with 100,000 people looking it over on the first weekend. Houses cost less than $10,000 in those days. He sold a ton of them.

He was part owner of the New York Yankees from 1945 to 1964. He paid $2.8 million for his share or maybe that was the whole enchilada. Imagine having Joe Dimaggio, and Mickey Mantle, and Yogi Berra working for you. Must have been quite a guy. 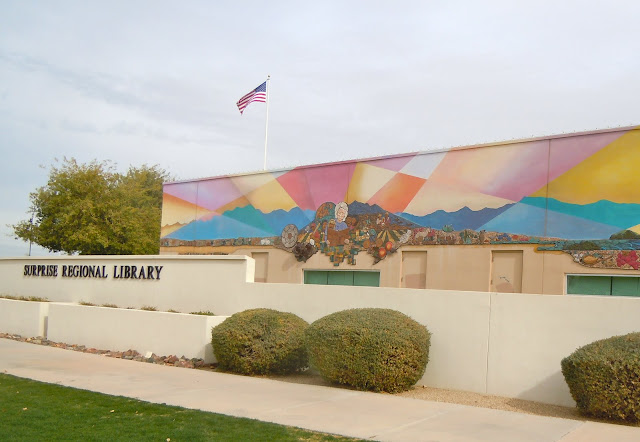 Surprise AZ that is. I went to Surprise Stadium on the corner of Bullard and Buck O'Neil Way—yes that Buck O'Neil of baseball fame, especially of the Negro Leagues—to get some tickets for Spring training visiting relatives. They run things well at this venue and they don't rip you off for parking either. Got some nice seats in the first row of the upper deck which is in the shade: Brewers v. Rangers.

The fields for the Royals and Rangers sit in the middle of about 500 nearly empty acres in which the local government buildings and the local library, see above, are also found. 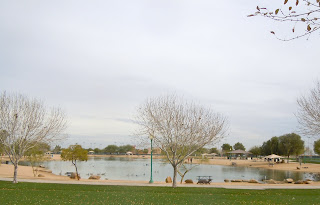 During the good old days a few years ago they built two motels and a cluster of apartments near the ballpark. There is a duck and goose pond behind the library.

By the way, getting a library card is more difficult than voting. I suppose it is a good thing that not just any Tom, Dick or Harry can get a card. In order to get in the door I had to pass the scrutiny of a tough-looking retired cop. I am guessing they are taking lessons from the TSA. 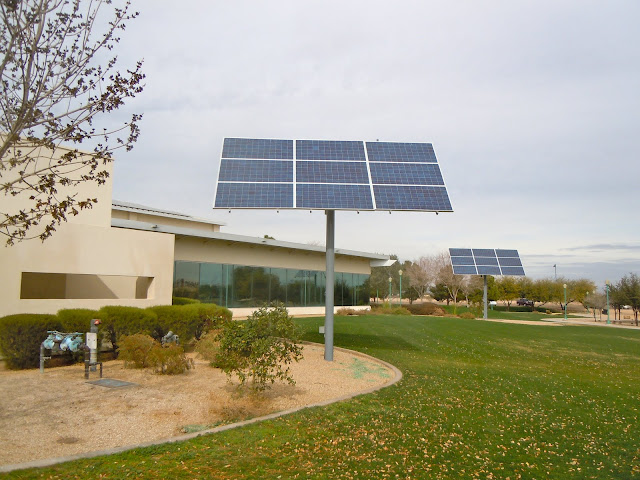 Watermelon measures around the Northwest Regional Library of Maricopa County. 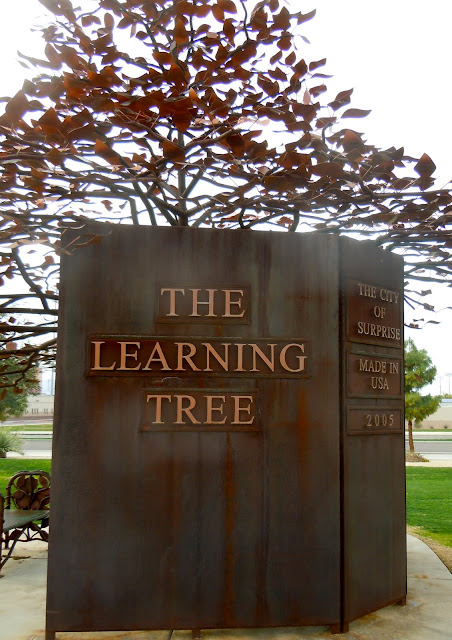 Urban architecture at the Library. Just across from the Ranger/Royal Fields at Surprise Stadium.
Posted by Ken & Carol at 21:10 No comments:

Check out this interesting recipe.
Posted by Ken & Carol at 08:32 No comments:

Heavy Snow in Alaska in January: How Come?

Snow in Alaska in unusual and unpredicted amounts has lower 48 weather people puzzled. Here is the story as reported in the always certain Washington Post. So that is where all the snow missing from other places has gone to hide. Perhaps this is similar to all that global warming hiding out in the deepest parts of the oceans.
Posted by Ken & Carol at 10:47 2 comments: 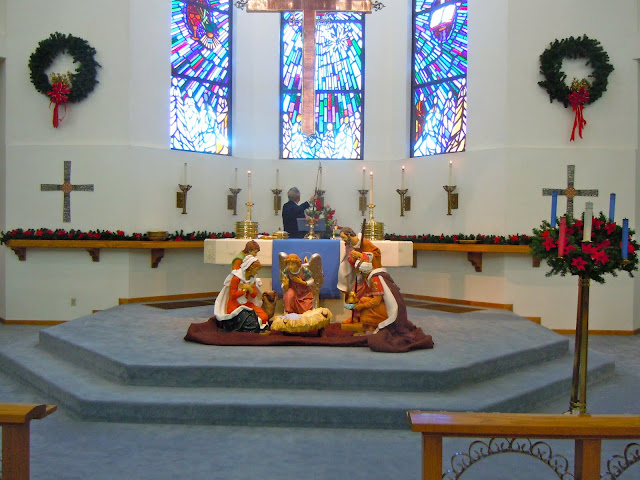 I enjoy the Christmas season, even after I learned who Santa Claus really was. One of the reasons that I like it is that it carries on from some time in Advent at least to Epiphany, or Russian Christmas as my wife is wont to say. As a child she always had two Christmases, her German Lutheran grandparents celebrated on 25 December of course, and her Ukrainian Orthodox grandparents celebrated on 6 January.

There are a lot of good songs to sing after Christmas too, e.g.—We Three Kings of Orient Are: I found this here.


Prince of Peace Catholic Church and Crown of Life Lutheran Church, see picture above, both here in Sun City West, were both decorated as for Christmas Day when celebrating Epiphany today. The older priest at Prince of Peace, sorry, don't know his name, gave a quiet dignified homily today, emphasizing the theme of journeys once again, and of bringing something to Mass rather than "getting something out of it." 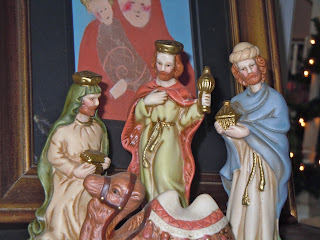 I wonder why some people clean up their Christmas decorations on Boxing Day, or maybe the evening before. Maybe they are the ones that put them up on the day after Thanksgiving.

The picture to the right is from Peg's place in Issaquah WA. We were in Novato CA on Christmas Eve, courtesy of Southwest Air, at the 10pm Mass, a little early for Midnight Mass.

Most of the parishioners were unfamiliar with the recent changes in the liturgy. What does one do when all those around you are sitting when you know the usual posture is standing?
Posted by Ken & Carol at 16:57 No comments: