On the Way to Kenya 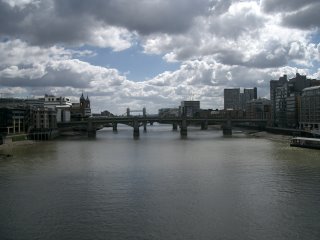 At the suggestion of Bob Thompson, an old boss of mine from Armed Forces Institute of Pathology days (that was the late 70s in Wahington DC; Bob was in the Navy and I was in the Air Force), Carol and I decided that it might be fun to serve a month as a kind of medical missionary at Kijabe, about an hour north and west of Nairobi. This was under the organization of Samaritan's Purse, a large evangelical outfit headed by Franklin Graham, Billy's son. Of course, the whole truth might be better served by mentioning that finding a place for pathology skills is not easy in the developing world. I am too old to go back to clinical pediatrics so I really jumped at the chance to serve using some skills that I still felt reasonably confident about.

But of course, in order to get to Kenya we had to go through London. What a good idea. Here we are in the picture above on the Millenium Bridge looking down the Thames. I forget the names of the next three visible bridges. That might be Tower in the background. 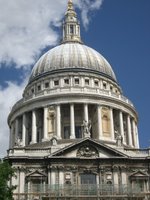 We had just walked down from St Paul's Cathedral, right, after attending a fairly high mass with beautiful singing around mid-day on a Sunday of all days!

We stayed in Eccleston Square, fairly close to Victoria Station, in some Edwardian townhouses now mostly converted to small hotels. I saw a plaque that indicated that Winston Churchill used to live nearby. 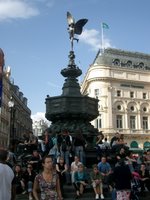 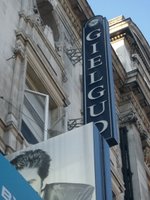 Of course, we couldn't resist having a look around London, (that is Eros in Piccadilly Circus with the usual gang of kids sitting at the base; and the former Globe Theatre, now the Gielgud, in the West End, above left and right). The Underground is just as quick and handy and fun to get around London as it was in the 70s.

We took a quick jaunt to RAF Halton near Wendover where we used to live in the 70s while serving with Her Majesty's Royal Air Force; and finally, we spent a day in and around Taunton visiting our friends, Andy and Jacquie Adams. 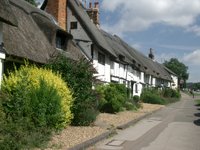 Wendover was about the same, though the old-fashioned ironmonger had disappeared, and the High St now boasted a supermarket, but RAF Halton was difficult to recognize, especially as the hospital where Peter was born is now closed. I wasn't sure about the Institute of Pathology and Tropical Medicine as it looked about the same, low undistinguished buildings with not much evidence of activity, i.e. about the same as it looked in the 70s. Maybe this is what moth-balled facilities look like in the UK? 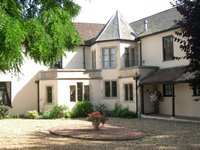 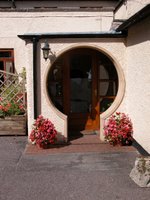 The housing patches looked the same. Ours was called Rosemead if I remember right. The Officer's Mess, formerly a Rothschild mansion looked about the same.

Andy and Jacqueline were the same as always, that is, loving gentlepeople. They are in the process of getting their lovely home just outside of Taunton ready for sale, but will look for something smaller and easier to take care of in the surrounding area (Taunton is about 90 minutes from London Paddington Station.) Note the hobbit round entrance for special guests!

After 5 days in London and Taunton we flew to Nairobi on British Air with only water bottles for sustenance. Apparently the catering people were having labor difficulties. Nairobi looked like a large village except for the downtown area which had some tall buildings. We stayed at Mayfield Guest House over the weekend and had a look around the city. We met a famous soccer player from the 60s, (that is Joe in the middle, left) before they automatically became rich, by the name of Joe Kadenga, who was our taxi driver while in Nairobi. He knew everybody and everybody knew him. Lots of fun driving around with him blowing his horn and acknowledging all his fans. We managed to pay for the shipping home of some souvenirs and then wound up paying on the other end whey they arrived in the USA. Glad to see the Kenyans were into doing some business, even if it was a little on the shady side.
Posted by Ken & Carol at 16:35 No comments: