A Visit to the Bozone 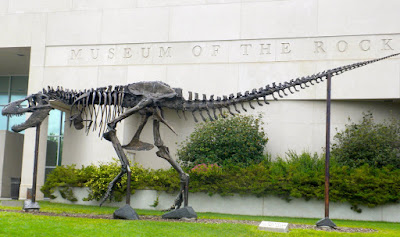 Do they still call it that? Bozone? Maybe not as the town shows many signs of gentrification. On the way back from Yellowstone Park we stopped in Bozeman to check out the Museum of the Rockies and have some lunch. Like all respectable fossils found in Montana this one has a name: he is called Big Mike. Though he looks fairly strong and their liability insurance is fairly good, the authorities request that you not climb on him. 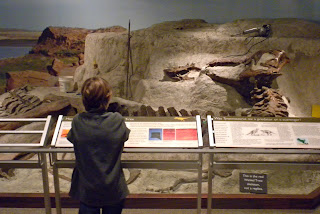 We haven't been here for awhile. The exhibits, especially the dinosaur parts have greatly improved. Entertaining for kids of all ages.

The T. Rex to the right probably has a name but I've forgotten it. Though dead for a long time, it is still the real thing rather than a plaster model.

I like the way they illustrate the finding and digging out of these remains. Fascinating. Plus the scientific reasoning with the information at hand. If only our present day global warming freaks would do the same. 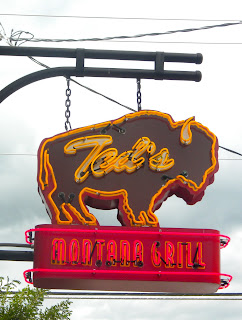 To be entirely truthful we were hungry when we arrived in Bozeman, so the first place we went to was the Hotel Baxter because they used to have a pretty good restaurant there. That is now just a bar or pub I think they call it and there is a new place across the lobby called Ted's Montana Grill. A little on the pricey side but very good food including some buffalo items that were certainly blogworthy. I had a bison meat loaf that was excellent. We had some good soup and our grandsons all enjoyed themselves on various burgers. 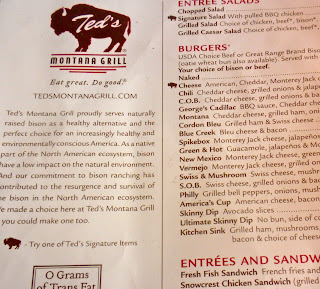 Check out their menu to the right.

And their website for more information. I just had a quick read. I didn't realize it was a chain. This is the 57th. Very good food anyway. And of course I didn't realize it had anything to do with Ted Turner. Mea culpa.
Posted by Ken & Carol at 19:07