Today, Wednesday, 1 Dec 2010,  there was a lengthy article in the Billings Gazette about a 5 year-old boy struck by a moving vehicle—identified only as a sinister “sedan”—as the boy and his 13 year-old brother—there is a picture of the two below—departed an Albertson’s grocery store in Helena MT. This occurred several weeks ago. Not sure why we are reading about this now and in Billings, but maybe yesterday was a slow day here in the Magic City.
The writer, Alana Listoe of the Helena Independent Record, gives us interesting detail about what the boys’ mother bought at the store, but there seem to be a few pieces of information missing. The way the story is told it sounds as if the driver of the sedan, mysteriously identified only as “the driver,” was at fault for not stopping at a stop sign. Apparently they have videotapes of the whole incident. According to the article the boy is doing well now. 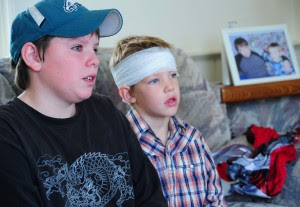 Curiously, in addition to not identifying the driver they also mention that he—aha, so it was a male—has not been cited for this apparent lapse of attention. I wonder why. Was he the mayor of Helena?, the police chief?, a priest?, an under-aged or maybe over-aged driver?, a Muslim? All of these except perhaps the last would usually have been at least named as the “alleged perpetrator.” Are the lawyers at work here, either criminal, in the form of a prosecutor preparing his case; or civil, in the form of a lawyer suing the driver and of course the deep pockets of Albertson’s on behalf of the injured boy? Hmm.
Perhaps now things are beginning to make sense: A sympathetic story about an injured boy, through no fault of his own of course, two weeks after the accident. This might be the opening statement for this lawyer. This smells like a large settlement here.
This reminds me of several close calls that I have had while a pedestrian in parking lots over the last few years. I had long thought that pedestrians had the right of way in these grocery store and other off-the-main-road places but perhaps the same stupid people who drive through uncontrolled intersections without even slowing down and wonder why horns are blowing at them, also drive stupidly in parking lots. The older brother in the Gazette/Independent Record story suggested, after he had had a chance to cool down and think about his response said, “I’d make him go back to driver’s ed.” And so might we all say. I note that in addition to being impaired by alcohol and other drugs, we can now be cited for using a cellphone while driving. Is running over a child or coming close to that a form of negligent assault?
But even after we have cursed the driver, there is still some room to at least question the grocery store about their parking lots. I mean, stuff like parking spaces when the lines are covered by snow and ice; how about a one-way system around the lot, not including the entrances and exits from the store; and maybe a walk-way down the middle between the cars on either side. I have seen this, or at least a start along these lines, in some places. Why not more? I have a hunch we would see fewer injuries and maybe even a few deaths that are now taken care of only by the lawyers.
Posted by Ken & Carol at 11:08