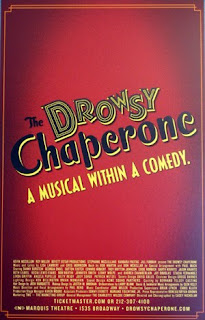 A recent—1998—farcical parody of the older Broadway musical, complete with a caricature of a mincing Alistair Cooke listening to show tunes from long-playing records, who explains to his half-witted presumably straight audience out in fly-over country the changes the word 'gay' has undergone in recent years and worrying about the 4th wall, blah, blah, blah. Don't miss the record catching near the end of the play. Terrific stuff.

The really good veteran comedic players of Billings—like Vint Lavender, Wendy Carlin, Shawn Bettise, Christie Arnold and others—pay no attention to him, the narrator, and just have a lot of fun singing and dancing this time-warped musical puff-piece. There were a lot of good supporting younger and older players too. And some male dancers, good ones too. It looks like the musical comedy has a future right here River City.

A pretty good band featured a lead trombone, sometimes a little loud, but if you think your audience is a little hard-of-hearing, and some of us were, then they hit just the right notes at just the right volume. The low splats were spectacular. That is a reproduction of an original Broadway poster to the right above, from the Wikipedia entry above. 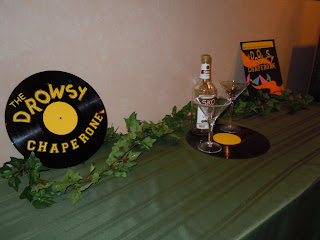 I thought the costumes were spectacular. The sound sometimes left a little to be desired. Not sure the amplification was needed, though it did allow the band to play a little louder.

To the left is a picture of the usual theme of the evening in the foyer of Billings Studio Theatre. Bev Clarke sometimes used to do these things. She has recently gone to her reward—bless her beautiful soul. The whole of the 2011-2012 season is dedicated to her. 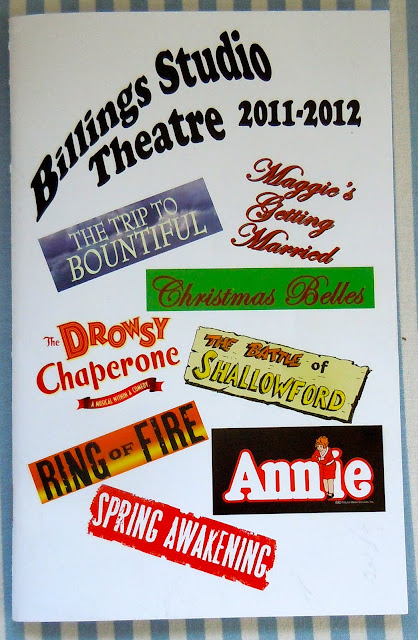 This is the opening show in what looks like a great year. There are only two more performances of the The Drowsy Chaperone—right, no sense to the title, just part of the contrived zaniness which the players treat with the disdain it deserves. They really do make it work. Tonight, Friday, and Saturday night are the last performances. Go see it. There are more than enough belly laughs as well as small smiles in this one. See the rest of the year's program below from the playbill.
Posted by Ken & Carol at 11:55