How many towns in this country of around 100-150K souls can boast of two full service custom hat makers? These are not mad hatters either. Soon after we moved to Billings I bought a pair of cowboy boots. I wore them on ceremonial occasions but my feet got tired, especially while standing at the autopsy table. I gave them away after coming across them in a dusty, dark part of my closet some years ago. As I continue to age my feet seem to be getting larger: I guess gravity is winning out after all, so softer and more comfortable shoes are highly sought after by me.

Not only my feet, but my head seems to be enlarging too. I'm pretty sure I wore a 7 1/4 size cap when I was a boy and that was with hair too. Now it seems closer to 7 1/2. So again I started looking around for a nice hat soon after we arrived in Billings. I think some of the clothing stores we had back then actually sold hats too, but eventually I steeled up my courage to have a look at a custom Western cowboy hat. The only place in town in the 80s was Rand's. I still remember the sticker shock when I first started looking. 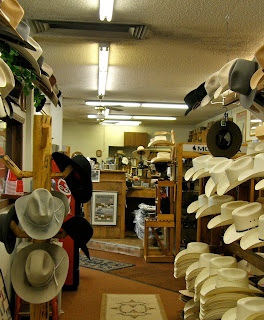 In fact, I bought one of their really nice custom hats a year or two after we moved here in the summer of 1980. It served me well for quite a few years. The good people at Rand's cleaned it once and stretched the hatband a couple of times because I tend to sweat a lot, especially on my head. I even had my own private hat peg in one of the funeral homes that I used to perform autopsies in. Rand's Custom Hats has been around for about as long as I've lived in Billings. By the way, they have a nice website to give you an idea what they have available and tell you a little about Western hats too. Worth having a look at but nothing beats going to the shop in person. The sticker shock is probably a little steeper at Rand's compared to Law Dog.

A friend of mine from England visited us about 15 years ago to recuperate in the nearby mountains from a case of tuberculosis. Since he worked in their National Health Service he was somehow able to talk them into some considerable time off in addition to the drugs to combat his illness. He liked my hat so much that I felt obliged to give it to him, figuring that he might not have that much time left and who knows, it might help him with his illness. He is still wearing it as far as I know, and apparently cured of his TB. The parking lot, above, in front of Rand's is often filled with pickups. 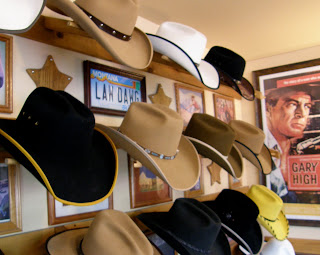 So I've been cowboy hatless for some time now. Just recently, after reading an article in the Gazette about Randy Rains, another young hatter in Billings, I felt the urge to look for another nice hat. Because I've got an odd-shaped and fairly large head I thought I'd look at the custom made options once again as the off-the-shelf varieties just don't seem to fit right. Both shops are pleasant places with personable people willing to help you out. Rand's is larger and apparently has some outlets scattered around the western USA. 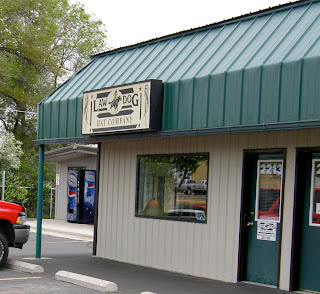 I was a little surprised to hear that a young guy that used to work at Rand's had started his own shop on Main St in the Heights, on the right as you get close to the turn off to Roundup.

Law Dog Hat Company is a little more recent addition to the specialty stores in Billings. Both tell me that they are doing well in this worrisome economy. The name comes from a movie, but I forget which one. Lots of posters from old movies are scattered around this one man shop.

Randy at Law Dog was very helpful, as was Luke at Rand's. I still haven't made up my mind as there are a lot of styles and colors to look at, though I do favor the softer and less cowboyish styles.
Posted by Ken & Carol at 11:44