Arrived in Pittsburgh Only 2 Hours Late

This headline is about on a par with the one that won the London Times contest for most boring headline: “Small Earthquake in Argentina, Not Many Dead.” Please forgive me. 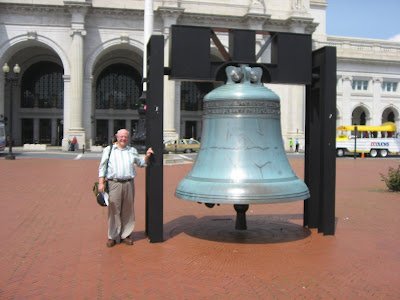 That is me alongside the Freedom Bell, a little larger than the one in Philadelphia. This one sits in front of Union Station Washington DC. We arrived here about 3 hours late.

I should apologize to the state of North Dakota for complaining about bad roadbeds. It was just as bad in Ohio, which is where I think we were last night, as I thought I saw a fleeting glimpse of Cleveland out the window at about 4 in the morning.

Got into Pittsburgh about 7am, about 2 1/2 hours late, which puts us into Wash DC about 4pm. Good thing we don’t have an afternoon game today.

Good breakfast as usual: scrambled eggs and sausages, but then my breakfast tastes are very simple. It looks a little cloudy today and there are a few raindrops on the window. Looks fairly green out here. I am really into William Maxwell, especially an early novel “They Came Like Swallows.” His childhood memories are a rich source of material.

This is Ascension Day, the 40th day after Easter Sunday, a great feast of the liturgical calendar in the past but these days it seems to be not so important. I don't know why. Supposedly on the Mount of Olives, where there is a small stone building still standing which protects the rock said to show the right footprint of Jesus before he ascended. Over the years the Muslims and Crusaders and others too I suppose have built and destroyed and re-built over this area but the small stone building housing the rock has been preserved. See above.

By the way, if you are worried about the apparent discrepancies between the various Biblical accounts of this phenomenon the Wikipedia entry above may be helpful.

We finally arrive 3 hours late, apparently about par for the course.
Posted by Ken & Carol at 07:22