I did two things today: I bought a couple shirts from Tommy Bahama, who calls himself a "purveyor of island lifestyles," and I saw a play in Ashland's New Theatre. See further below. I hope someone steps forward soon with a reasonable name and gives enough money to warrant having a theatre named after him. Let's see now: Carnegie, Rockefeller, Gates and many others I'm sure; none of them would miss the money though I suppose they might be accused of being an elitist. 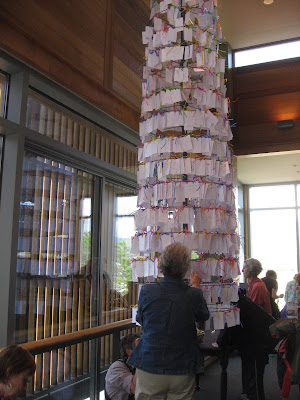 This is a kind of old-fashioned note holder where play-goers could leave notes for anyone I suppose, but especially for our troops still in harm's way. It kind of reminds me of the notes left in the Wailing Wall in Jerusalem and maybe some Buddhist prayer notes that I saw in Japan.

The play, Welcome Home, Jenny Sutter, was about a normal person who volunteered to do an abnormal thing, and that is, of course, for a mother to go away to war, and then had done a very bad thing (see below), and was feeling bad about that, and uncertain if she could go back to being a normal person again. Of course, a bunch of misfits are the ones that convince her that she is OK enough to go back to her family and kids. It was really well done by playwright and players at the Ashland Shakespeare Festival. 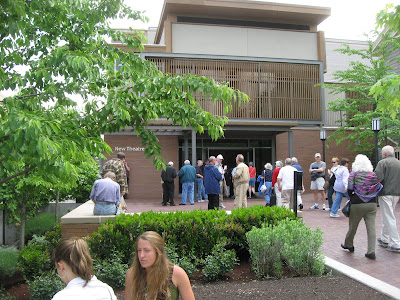 This is a new play by Julie Marie Myatt. Jenny is a mother who volunteered to go to Iraq, doesn't carefully check a baby's diaper, and when the mother of the baby detonates the explosive in the diaper, in addition to blowing the baby to smithereens, Jenny's unit and others are blown to bits and she loses her lower right leg. She suffers from PTSD and, quite naturally, low self-esteem. She can't get the memories out of her head, nor does she want to go home to her family, though not sure exactly why. She hangs out in the desert of California with a bunch of misfits who are abnormal and funny enough to gradually persuade her that she is OK and maybe even normal enough to rejoin the normal world.

It said something useful about the returning veterans, mothers going off to war, and then coming back wounded, post-traumatic stress disorder, and a few other things too. It is not the usual leftist rant about the present administration, so I suspect it will get some bad reviews, especially when it goes to Washington DC sometime this summer. I would recommend it highly. That is Jenny Sutter below, thinking about her situation. By the way, there are some deliciously long silences in this play. 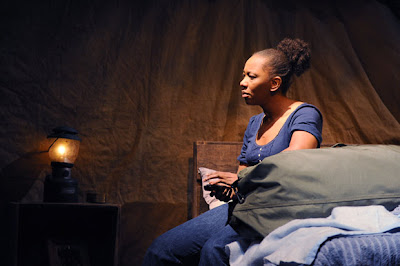