Why I Ride the Train 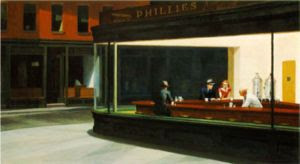 For one thing, it is very hard to get lost. Having a guide is a very freeing experience. And it is nice to turn over the driving to someone else. Wasn’t it Greyhound that used the slogan “Go Greyhound and leave the driving to us.” Yes, it was: aren’t Wikipedia and, of course, Mr Google, superb inventions? I just plugged “Greyhound slogan” into Google and there it was. By the way, whatever happened to Greyhound? I never see their ads on the TV or hear them on the radio. One would think that passengers might be more interested now with the cost of gasoline going up.

And then secondly, It gives you a chance to travel slowly enough that you can think about what you are writing or reading. Which reminds me I am finding William Maxwell very delightful. I like his style. So you can either sit and think, or just sit.

Thirdly, you often meet interesting people in the dining car, e.g. a couple from Chicago who take the train from Chicago to Washington several times a year to visit their children. I mentioned that I was born in Harvey, IL and lived there til I was 4 years old. This got a response from Rosalie that she had lived in the same city from age 3 to 10. And then we started in a general free-for-all about memory and its peculiarities. It was an enjoyable dinner. the food was fairly good as was the wine, and, of course, the Haagen Daz ice cream is worth any price.

Fourthly, for some reason, seeing houses pass by quickly sets my brain to thinking: they have their lives and I have mine, and it seems unlikely that they will ever intersect with each other except for the fleeting visual contact as we pass by. This sometimes sets in motion the formation of stories, both mine and theirs.

Fifthly, the train often goes through the backyard of towns I would never otherwise see. I am always curious about what people are doing in their backyards. I think that is one of the reasons I so enjoyed the Art Institute in Chicago. In addition to their large collection of French Impressionists, they had a special exhibit on Winslow Homer and Edward Hopper. The latter was particularly interested in people or things seen through windows, say from passing trains, or people together yet apparently alone, e.g. his iconic Nighthawks, see above, with the people sitting in a late night diner and the viewer outside the plate glass window. I like to keep my drapes open on the train even at night just in case there is another Hopper out there, looking for material, somewhere in the small towns we pass through.
Posted by Ken & Carol at 16:58