Just A Closer Walk With Thee 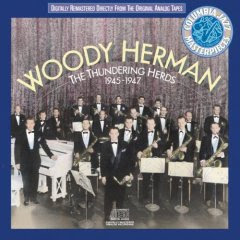 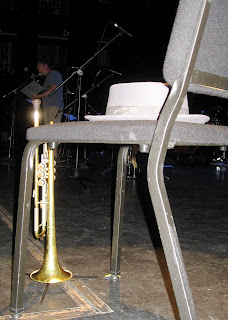 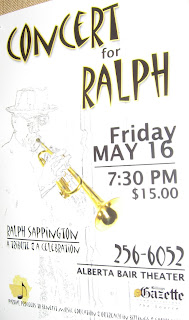 If you play a trumpet, and you are a friend of mine, or even just an acquaintance, please be careful out there.

The friends and family of Ralph Sappington celebrated his life last night at the Alberta Bair. He had a knack for assembling outstanding musicians; last night was no exception, even posthumously he hasn't lost his touch. It was tasteful and musical, as Ralph always was and is, come to think of it. A guy by the name of John Roberts, from Malta MT, who did some amazing things with a trombone that Ralph had given him a dozen years earlier, seemed to be the musical director. There were some awesome saxophone players and a left-handed guitar player that just wouldn't stop. They were all very good.

The closing number was Just A Closer Walk With Thee, with lots of tear- and joy-filled choruses. Sorry, this version above is a little corny.

The reason for the warning is that during the show I remembered a few other trumpet players that cashed in their chips way too early. I played with Dick Ruedebusch in high school: He sold cars for an income but he played traditional music for a living. As I was returning from a trip east a few weeks ago, I may have stumbled upon the alley just off Wells St I think that led to the nightclub in Milwaukee that he played at while I was in college in nearby Waukesha.

Dick Ruedebusch and his Underprivileged Five Plus Two playing St James Infirmary Blues. Oh yeah. I was shaken by his trumpet sound early one morning as I was drifting off to sleep my first year in medical school, ca. 1962, but I knew that he had recently died in his 40s from a valvular problem with his heart in the days before the surgeons fixed those problems almost easily. There is a place in your temporal lobe where these things are stored, so I instantly recognized his sound: Of course, it was a recording made with Woody Herman. Whew, I got a little shaky there for a minute or two. That might be the cover of the long-playing record if any of you still remember that terminology.

And then I remembered my friend, Don Ferguson, who wrestled with some form of lymphoma that just wouldn't let him go, despite all the best efforts of his oncologists. I was lucky to play in a brass quintet with him and other real musicians some years ago when the concept of "middle age" was just slowly teasing itself through my brain.

And now Ralph, who liked his fellow musicians enough to write some parts that would stretch you even if you were down on 3rd or 4th trombone.
Posted by Ken & Carol at 07:19

Don't know if you'll see this, it's over two years since you wrote about Dick Rudebusch. I'm your age born and raised in Milwaukee now in Dallas, TX. Doing a search on Rudebusch and found your blog. You saw him in Milwaukee at the Tunnel Inn, which is now the "Safehouse" and somewhat famous. Yes, it's on Front St. just off Wells near the Pabst Theater. We always went there after Marquette basketball games. I was a couple years too young but had a doctored driver's license. Just had to write when I saw your memories of Dick Rudebusch. So sad when he died and the music died with him around that time. If you get back to Milw. you must stop at the non-descript from the outside 'Safehouse'. Think it has some import, export sign outside. Google it.

Thanks a lot Anon. Us old and obscure bloggers love to see comments on our old blogs, especially the ones where we tried to illustrate a little of what was in our heart. I got a little teary just reading over the blog of two years ago. I even started looking for an old Ruedebusch CD my brother gave me some years ago. Terrible recording but Dick's sound and style were always recognizable.

Thanks for filling in the name of the nightclub he and his group played in—Tunnel Inn—that goes back to the late 50s when I was a student at Carroll College.

Dick played in the Hartford City Band just to keep his lip in shape while selling cars earlier in that decade and so did I. I would have given up a lot to be able to play in that Dixieland (Dick didn't like this term, he preferred "traditional") style without a music stand in front of me but I couldn't even remember the tune let alone the changes on most songs.

Next time I'm in Milwaukee I will go back to Front St. It sure looked familiar even after fifty years.

He married a Hustisford girl, where I grew up in Dodge Co, Marilyn Roethke, (?sp) and at least some of their kids were named after Bix Beiderbecke.

We all had doctored driver's licenses in those days. I remember a bar-tender at our regular hangout in 1961 when we were celebrating my 21st telling me how glad he was that I was finally legal.

Thanks again for writing your note. I attended a musical weekend in Medford OR last year. They had a lot of groups that played traditional jazz. See my blogs from 9 and 10 October of 2009.

Thanks for the tip on SafeHouse. Best wishes.

Carl Trendler (CATrendler@aol.com) recently reminded me that Dick died in 1968, some 6 years later than I mis-remembered. I think this is a matter of putting things together in your memory that seem to go together in order to make the story better. See my later blog in early December 2011.