In Case You Haven't Driven Up 27th St Lately 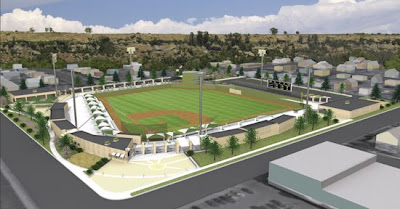 The above picture is an artist's idea of what the new Dehler Park would look like when it was finished.

And now, ta—da: Here are the latest pictures fresh from Dehler Field. 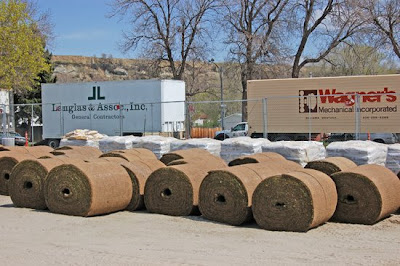 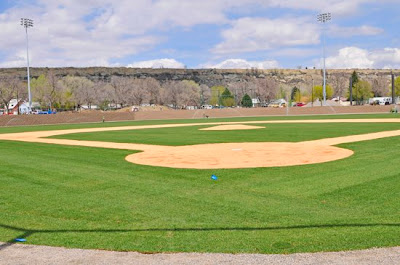 And this is what it looks like 8 May 2008, green side up, i.e. with directions for the differently abled groundskeeper! Some of us are drooling at the sight of the grass. Opening Day or Night is 1 July 2008 for the Mustangs who will have been playing on the road for about 2 weeks before coming home. There will probably be a few preliminary Legion games played there a few days before to make sure the kinks are all out of all the systems. 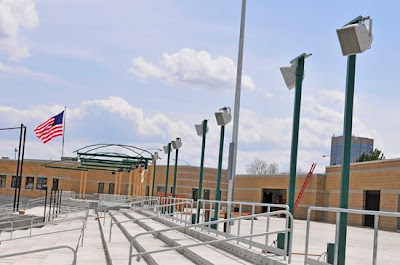 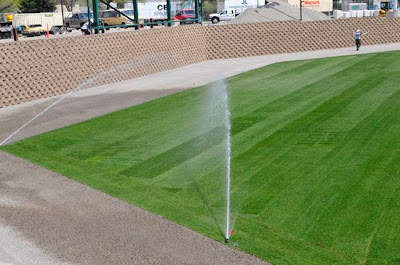 Or the sprinkler system. I remember a few times over the years that it came on while a game was being played. I think my friend, English teacher and Head Groundskeeper at Cobb Field Lowell Gorseth, who died much too early from a brain tumor, occasionally took a nap at those times. That outfield fence still looks dangerous to me. But then, I suppose the wooden fence of the older Cobb Field was fairly unforgiving too.

While I am thinking about it, I must re-read some or all of A Bart Giamatti's little classic Take Time for Paradise. I would recommend it for everyone, baseball fan or not. 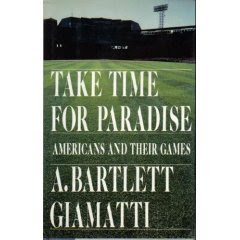 [Giamatti's book is a celebration of baseball's "freedom (for) the promise of an energetic, complex order." "Baseball," Giamatti writes, "fulfills the promise that America made to itself to cherish the individual while recognizing the overarching claims of the group. It sends its players out (around the bases) in order to return again, allowing all the freedom to accomplish great things in a dangerous world. So baseball restates a version of America's promises every time it is played. The playing of the game is a restatement of the promises that we can all be free, that all succeed." ]

The above is a part of Mark B Cohen's (who seems to have a hobby of writing insightful reviews of excellent books that may have been overlooked by the mainstream writers) review of this beautiful little book published after Giamatti's much too early death from a heart attack. And there is more too, about cities: This excerpt reminds me of my father's view of politics back in the 50s. He was saddened by the later common pejorative use of the word, as he was very proud to call himself a politician.

["The defining characteristic of a city over time is political. Indeed, the word political contains at its root the Greek polis, or city. Politics is the art of making choices and finding agreements in public--or the art of making public choices and agreements. Politics is the ultimate act of negotiation in a city, but it is only reflective of the constant activity of the city, as individual, daily choices and agreements and decisions, flowing from the central choice not to live alone but among others, swirl around and make up rambunctious, noisy, restless, demanding, hectic, city life."]

Today, I was sitting at my desk when a poem popped into my head. The poem is called "April" and was written by Marcia Masters.

In my head, a deep sing-song voice is reciting the poem...

I don't know what made me think of the poem, but every time I think of it, I hear Mr. Gorseth's voice. Bouncing, light, airy....singsong. He brought the poem off the page and gave it life. It's probably been 30 years since he recited that poem in my English class and I can still hear it. I still know it.

He was such an awesome teacher. I wanted to tell him that. I "googled" his name to try and find him and came across your blog post. I guess I'm too late. I hope someone else had the chance to thank him and let him know what a wonderful influence he was to his students. It looks like I won't have that chance - - so I chose instead to tell his friend.

Mr. Gorseth will never be forgotten. I tell my son about you after reciting the stanzas to "April" in a sing-song voice hoping that he will be able to see the "sun like watermelon" and the "waterfalls of grass" just as I did thirty years ago.

Thanks Anon for your comment. A lot more could and should have been said about Lowell Gorseth. I think the Gazette did a good job at the time of his death. My daughter Peg visited him as he approached that serene phase before death. She has not forgotten him either.